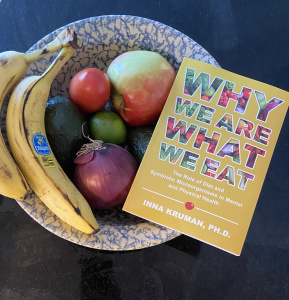 This month’s featured title is Why We Are What We Eat: The Role of Diet and Symbiotic Microorganisms in Mental and Physical Health by Inna Kruman, Ph.D!

The idea of a strong link between food and human identity is age-old. However, exactly how food affects the human body and mind remained unclear until recently, when researchers determined that our environment can turn gene expression off and on, thereby influencing the way we function. In Why We Are What We Eat, Inna takes a close look at these recent research advances and explores the interplay between the digestive, immune, and nervous systems.

We spoke with Inna about how humans’ relationship with food has evolved, the common misconceptions about health, and more!

As a researcher and professor in neuroscience, why did you decide to write a book about the link between food and human identity?

While scientific publications are a central part of academic life, this book is a popular science book written for a general audience. By communicating ideas and discoveries to the wider public, popular science books can generate debate, influence culture, and inspire future researchers. I wrote this book because food is one of the most critical environmental factors that determine its role in the normal functioning of living organisms.

Why are we what we eat? Why did you choose this as your title?

I chose this title because the main idea of my book is a modern view on the well-known statement that we are what we eat. I make an accent on “why.” How does food affect living organisms, their physical and mental functions?

Contemporary research establishes the ways by which food affects our body and mind, explaining WHY we are what we eat. Other relevant books are mainly about practical issues, such as specific diets, protocols, clinically proven programs, or nutritious recipes. However, in my book, I focus on the scientific causes of the digestive system’s reaction to diet.

The history of human diet and nutrition represents an interface between biology, culture, and the environment. In the six to seven million years since our last common ape ancestor, human evolution has resulted in significant nutritional and physiological changes. One of the most striking differences is increased meat consumption. Since meat is more calorically dense than vegetables, a higher meat content in the human diet is an adaptation to the high metabolic costs of our brain. This steady increase over a period of a few million years allowed for dramatic growth in the brain size of our pre-human ancestors.

Another important step in human evolution is cooking, which helped to make meat and plants more digestible and nutritionally available. Additionally, we’ve created many new technologies related to food: the ability to process and preserve foods for storage, smoking, drying, salting of meat, fermentation, and producing bread, beer, or cheeses. These new technologies made possible the production of safer and more stable foods. As human culture advanced, different populations of humans introduced new technologies that resulted in an extraordinary diversity of human diets.

It is difficult to predict how our relationship with food will change in the future, but these changes are already taking place in some ways. The nutritional transition to the Western diet (a modern-day style diet), associated with massive shifts toward processed foods, disturbs immune function and promotes inflammation. This can be associated with significant changes in the composition of the microbial community and, consequently, to some metabolic health issues, including obesity and diabetes.

What would you define as being “healthy”? What are some of the common misconceptions about health and diet?

The World Health Organization defines health as “complete physical, mental, and social well-being.” What we eat has profound effects on our overall health. Research shows that dietary habits influence the risk of different diseases. Bad diets are responsible for more deaths than smoking or high blood pressure. Being healthy, however, does not mean only the absence of physical illness. Mental balance and the absence of stress are also very important. A growing body of research shows that social ties are as important for our health as diet and exercise. What is healthy and not healthy changes constantly. Several well-known misconceptions about food are well known. For example:

(1) Many diets ban carbs. However, the truth is that carbohydrates aren’t bad for a human organism. When eaten in the right amounts, carbs are healthy. They are the main source of energy. Complex carbohydrates like the ones you find in brown bread and wholegrain products are better because they slowly release sugar into the bloodstream ensuring a steady supply of energy, and they make you feel fuller for longer.

(2) Fats are seen as bad for your health, and fat-free foods are healthy. We need fats to provide energy for our bodies. Additionally, they allow our body to regulate its temperature (brown fat), build hormones, support our immune system, reproduction, and more. A fat-free diet is not a good idea, and fats are actually very healthy in moderation.

(3) Eggs — particularly the yolks — have gotten over the years for being high in cholesterol. However, guidelines for egg consumption have been modified as more research is done on their health effects. Moderate consumption of eggs is healthy. Thus, moderate consumption of complex, not simple carbs (sugars), fat, and eggs are good for our health.

What surprised you most in your research on how food affects one’s well-being?

(1) Diabetes was mostly unknown among Native American populations during the first half of the twentieth century. However, since the 1950s, the prevalence rates have increased dramatically (In some American Indian and Alaska Native communities, the diabetes prevalence among adults is as high as 60 percent). These changes can be explained by the lifestyle alterations over the past fifty years (e.g., less activity, greater food availability, and more fats and simple sugars in diet).

(2) Autism, a disorder characterized by disturbance in language, perception, and socialization, is usually linked to neuroinflammatory conditions, dysregulation of the immune system, and altered bacterial gut microbiota. In some cases, remodeling the gut microbiota alleviated the symptoms of autism.

(3) Promoted by changes in diet or antibiotic therapies, dysbiosis (alterations to the composition of the gut microbial community) plays a critical role in allergy and autoimmune diseases, as well as in the development of mental disorders, such as depression or schizophrenia, and neurodegenerative diseases like Alzheimer’s and Parkinson’s. Thus, our gut health is required for overall good health and wellbeing and depends on our diet.