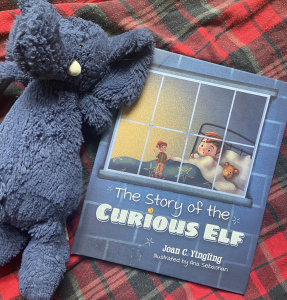 October’s Featured Title is The Story of the Curious Elf by Joan C. Yingling!

On a special night before Christmas, a small boy meets a lost, lonely elf who lets his curious nature get the best of him. Stranded and alone in an unfamiliar place, the elf doesn’t know if he’ll ever be able to find his way back home! Will he ever be able to get back to his family and friends in Santa’s workshop?

We spoke with Lydia Cohn, who published this new children’s book on behalf of her mother Joan, about what makes this book special, what it’s like going through the publishing process in honor of someone else, and more.

Can you tell us a bit about the author? What was she like as a person and a writer

My mom was a spirited woman who enjoyed nothing more than getting together with family and friends. She taught herself how to cook, bake, sew, knit, and crochet among other things. She was an avid reader and loved doing the crossword puzzles in the Sunday paper. She was a huge fan of the Philadelphia Eagles and never missed a game on TV.

With such a busy life raising seven children and working full time as a hairdresser, it’s hard to know how mom found time to write the many poems she wrote while we were growing up. Her poems often told a story, and when our daughter suggested they would each make great children’s books, I jumped at the idea because I had always wanted to have her stories published for others to enjoy.

What is the backstory behind this book? What makes it special?

Christmas was one of mom’s favorite holidays. She made sure our Christmases were full of imagination and fun traditions.  The Story of the Curious Elf was born from one of our family’s holiday traditions. Every year the local Thanksgiving parade ended with Santa Claus appearing and waving to the crowd. My mom told us that was when Santa’s magical elves would hop off the float and go visit the houses to check on the boys and girls to report back to him on who was naughty and who was nice. She would often remind us that “the elves are watching” in order to keep us behaving well.

The elves would mysteriously appear on Thanksgiving night. It was always so exciting to spot the first one. When we weren’t looking, they would change locations and we’d squeal with delight in shouting “it moved!” My mom was clever, as we never caught her in the act of moving them.

What is it like going through the publishing process in honor of someone else, specifically your mother?

Going through the publishing process was a very emotional experience for me. These were my mom’s stories. I wish I had asked her more about what inspired her. Mostly, I wonder how she ever found the time to write. And, why did she write? Did she ever intend to try and publish her work or was it just a hobby for her? These are answers I’ll never have.

There’s a lot that goes into creating a book even after the words are written. With every decision, I made sure I was doing what I thought my mom would’ve wanted. Mascot Books made the process a whole lot easier because they tell you where to start and what comes next. I was so grateful to have them coaching me along. They helped me select my illustrator, Ana Sabastian, who somehow was able to extract from my imagination exactly how I pictured the characters and story unfolding. Then there’s deciding on which parts of the story you want to have illustrated. That was hard because this particular story ran like a movie in my imagination. There were so many images and I had to decide which ones to use and which words would appear on each page. And then there’s cover design and back cover design, etc.

When you open the box of your books for the first time and see all your work in living tangible color, you just can’t believe the rush of excitement, joy, and relief you feel. It’s the culmination of all your hard work as well as the embarkment on a whole new adventure because now you have this wonderful story, in a book form, to can share in such a delightful way. I think my mom would have been very pleased with how both books have turned out.


What makes this book different from other children’s Christmas books?

What makes The Story of the Curious Elf unique is the literal soft feel of the cover and the tone of colors used in the illustrations that lend itself to cuddling up to read a bedtime story. It has such soft blue tones rather than your typical red and green colors of Christmas. It’s exciting when you first meet the little lost elf. You really want to help the elf find his way back home. Any child can easily imagine themselves in the story.

I also love how there’s a very subtle message to mind what your parents tell you for they know best.

In the very back of the book, I included four short poems my mom titled “Verses for Young Children,” an added bonus. The first one is a riddle that kids can easily solve.


What do you think would be Joan’s biggest dreams or accomplishments for this book? What would she hope for readers to walk away with?

Honestly, my mom would just be so thrilled to know her stories were being enjoyed by little kids everywhere. She would love it if reading her bedtime story on every Christmas Eve became a tradition for all families with little kids. And she would love for kids to carry on the tradition to read it to their kids. Of course, it would be such an honor if this book also received literary awards like her first book, The Story of the Can’t That Could.

She would love for readers to walk away with a sense of wonder and imagination. I think she would also be so thrilled if her stories inspired young children, and adults, to write their own creative stories.

When I began reading my mom’s stories to young children in schools, a reading specialist shared with me that my mom’s writing was so helpful for kids learning to read. The words rhyme so it helps children sound them out and guess which ones might make sense. And, there are just enough compounded words like “something,” challenging words like “through,” and words like “laugh” that you can only learn by sight. I don’t think my mom intended this but, how cool is that?