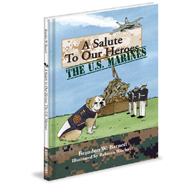 A Salute to Our Heroes: The U.S. Marines

A Salute to Our Heroes: The U.S. Marines has skillfully captured the essence of more than 200 years of Marine Corps history, along with the Corps’ core values of honor, courage and commitment, in a way that will keep a child’s attention from cover to cover. The hardback book is written in a delightful rhyming cadence with Chesty the Bulldog, the Corps’ mascot, giving a fun-filled, exuberant account of life as a Marine.

Chesty begins his narrative on the yellow footprints of a U.S. Marine Corps Recruit Depot, where every recruit’s journey begins: “Marines first go to boot camp, where drill instructors are loud. If they pass, they become one of the few and proud.”

Beautifully simplistic in its rhetoric, the book covers the basics of marksmanship and physical training, along with touching upon the ways a Marine can attack by land, air or sea. It even acknowledges the heartbreaking truth that sometimes a Marine has to leave family and friends behind in order to protect and defend America’s interests abroad.

The illustrations by Rebecca Wochner give the book added appeal by featuring Chesty in a multitude of military scenarios that easily capture and stimulate the imagination of young and old alike.