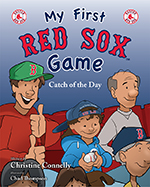 The batter swings and misses

“Dad, will you buy me peanuts?”

No pitcher, washed up

He can’t pitch to save his life

It’s just Sarah and her dad, heading to Fenway Park for Sarah’s first ever Red Sox game. Sarah plays in Little League and she’s brought her glove. Cloudy skies, raindrops, but also in the forecast is…Sarah’s favorite singer is performing the National Anthem at her first ever Red Sox game too! Now a rising star. Baseball has been played at Fenway Park for more than a century, so Sarah isn’t expecting magic and miracles but Mike Lowell, the Red Sox team captain and the 2007 World Series MVP is at bat when he swings and the crack of the bat rings out and …Suddenly I spy the ball is flying my way. Dad yells, Catch the ball! I think I can, I’m going to do it, I will catch that spinning ball! This delightful story, a one day memoir in verse with hip hop haiku, reflects the magic of a major league game’s spark and festive hullaballoo as seen for the first time through a young girl’s eyes. My First Red Sox Game is a lively ode to baseball, the Red Sox, Fenway Park, and father-daughter love which happened on May 2, 2008 on the hundred year anniversary of Baseball’s favorite song, Take Me Out To The Ball Game copyrighted May 2, 1908 in the oldest major league ball park in the country.