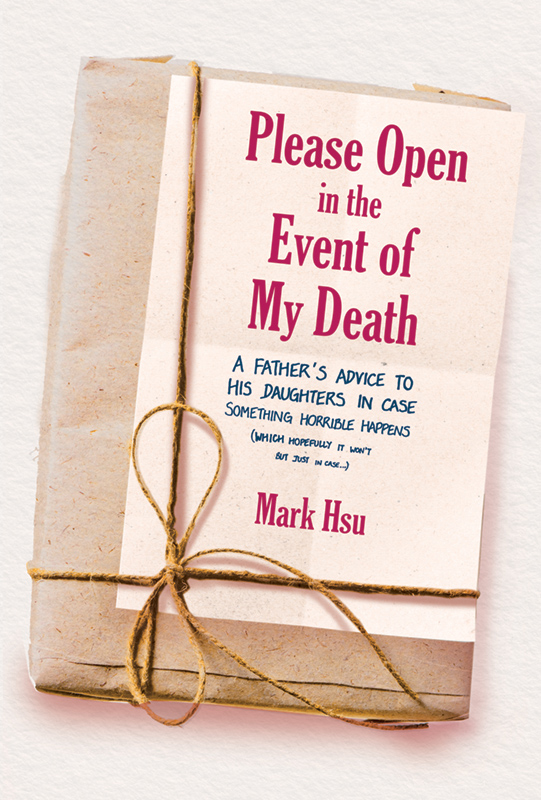 Please Open in the Event of My Death: A Father’s Advice to His Daughters in Case Something Horrible Happens (Which Hopefully It Won’t But Just in Case…)

Imagine your plane is going down. Prayer is useless. Fiery death awaits.

Now imagine your children. The hours spent feeding, giggling, teaching, changing diapers, soothing tantrums, gazing into eyes…all will fade from their memories until you’re just a name. What are the stories—from “unabashedly sentimental” to “exceedingly age inappropriate”—you would want to preserve? What advice would you give them, the hard-earned wisdom to prepare them for life’s challenges?

Well, Mark Hsu was never in a plane crash, but his crippling fear of being in one led to Please Open in the Event of My Death

A litigation partner in New York City, Mark remembers hearing the refrain that having kids meant “your life is over”…and how he welcomed it. He recalls the night he first met his Italian wife and decided that the Japanese-Chinese guy needed to go for broke and show off his Roman-accented Italian. He describes his lonely, peripatetic youth in Japan, Italy, and all over the East Coast as the only child of a deep-cover CIA spy. Drawing inspiration from a range of sources, including the Japanese concept of omoiyari, Charles Barkley, Ferris Bueller’s Day Off, Prince, and a Nike print ad, Mark offers astute advice—not saccharine or blindingly idealistic—for modern times.

Succeeding at work, navigating social waters, overcoming fear, surviving heartbreak, raising kids—this and other life advice, applicable to anyone, is in Please Open in the Event of My Death, just in case something horrible happens…which hopefully it won’t.