Skip to content
SUBMIT YOUR BOOK IDEA
Warning: Your summer reading list is about to grow. Just keep calm, check out our latest releases, and carry on.

Featured Title: When You Lived in My Belly 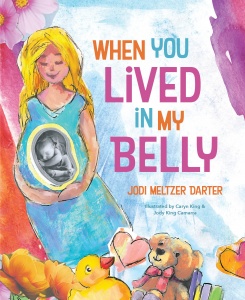 By Jodi Meltzer
As a mom, Jodi Meltzer Darter answers, on average, one million questions per minute. One day, her son interrupted his endless “Why?” barrage to inquire about their innate bond: What was it like when I lived in your belly?
A delightful month-by-month storytelling of pregnancy from the perspective of both baby and mom, When You Lived in My Belly gives children a glimpse into a past they can’t remember, and takes moms back to a time they will never forget. It features kid-friendly descriptions of the developmental milestones babies reach in utero, coupled with the corresponding physical and emotional changes experienced by moms. This book also includes a page for moms to pen a personal note to their children about their individual pregnancy journey.

Jodi Meltzer Darter’s lyrical text alongside enchanting illustrations by Caryn King and Jody King Camarra create a memorable keepsake that both moms and children will cherish for generations to come. 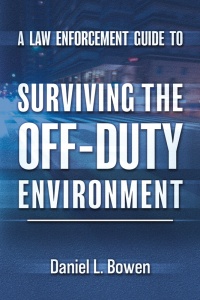 By Daniel Bowen
When choosing a career in law enforcement, we are responsible for the lives within our community, our fellow officers, and the representation of our department. However, many of us may forget the responsibilities to ourselves once we hang up that uniform at the end of the day. Our service never truly ends after our shift. Unfortunately, we may become exposed to those same risks off-duty as we would on-duty. Understanding our capabilities in an off-duty capacity will not assure our survival alone. We must acknowledge that we do not have the same resources, strength in numbers, tools, effective communication, or identifying markers to react in every off-duty situation. Mastering your emotions, understanding your surroundings, maximizing your skills, and minimizing your limitations as an off-duty officer only benefits the world around you. 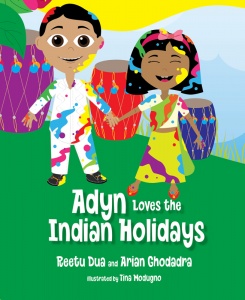 By Reetu Dua
Join Adyn as he enjoys the Indian holidays by learning about the rich culture and colorful traditions. Each page is filled with magnificent history brought to life with beautiful illustrations. Jai Hind! 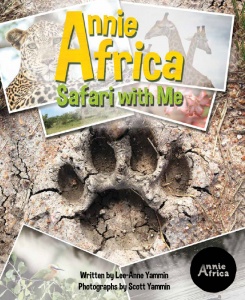 By Lee-Anne Davis
Join Annie Africa for the adventure of a lifetime on this wild African safari! Explore South Africa’s vast bushveld, track wildlife, and learn a little something along the way as you discover all the magic that the bush has to offer. 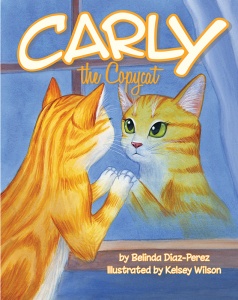 By Belinda Diaz-Perez
Carly is a very special cat. She just doesn’t know it yet! When she decides that she just isn’t enough, she begins to search for a way to be somebody else. Through trial and error, and with the help of some new friends along the way, she learns a very valuable lesson. Will this journey of self discovery change her, bring her back home, or both? Join Carly on her amazing adventure! 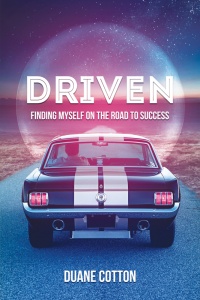 By Duane Cotton
From the day thirteen-year-old Duane Cotton saw that black and gold Mustang GT sitting in a driveway a few streets away, he knew that he would one day own that car. What followed is the remarkable true story of how one man and a car set out to take on the challenges of life, goal setting, and ultimately success. Packed with page-turning motivation, Duane invites you to sit shotgun, buckle up, and maybe just find what’s driving you. 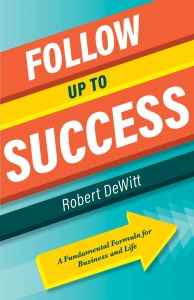 By Robert DeWitt
Oftentimes, the simplest of plans, words, or actions can make the biggest difference in our lives. However, most of us overlook or immediately dismiss simple solutions with one disheartening phrase: “It just can’t be that easy.” Can a shy, introverted child become a successful businessperson? Can you rebuild a broken relationship with a family member? Can a marriage that’s on the rocks be turned around? Can you become a top employee in your company?
Follow Up to Success says yes to all of the above and much more. Salesman Robert DeWitt knows better than most that triumph and prosperity are waiting for you just around the corner—and what’s more, he knows just how to get you there. In this simple and accessible guide for those from all walks of life, Robert outlines a strikingly succinct plan to achieving success in every area of life. No matter who you are, where you come from, or where you’re headed, Follow Up to Success will help you get there. 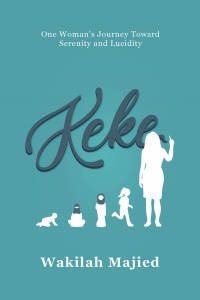 By Wakilah Majied
Keke’s struggle with abusive relationships and mental illness began long before she was diagnosed with schizophrenia at the age of twenty-eight. Bullied at school as a child and lacking a supportive relationship with her mother, Keke’s father helped her find comfort in Islam. But as her anxieties shift into full-blown psychosis, it becomes clear that Keke’s family—including her husband, and her mother, who is accused of poisoning her—are not only unable to provide the support she needs, but are actively making her condition worse. When she discovers she’s pregnant, it becomes clear that she must find the strength to overcome her circumstances or lose custody of her daughter to the people who have abused her. Keke: One Woman’s Journey Toward Serenity and Lucidity is a tale of perseverance, resilience, self-love, and forgiveness in the face of seemingly insurmountable obstacles. 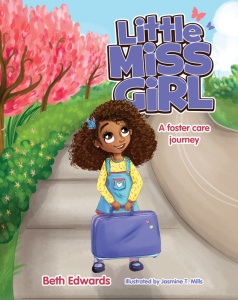 By Beth Edwards
Little Miss Girl goes on an adventure with Auntie, where the road ends with a new foster family. She suddenly finds herself
discovering a whole new world. Will she be able to fit into it? 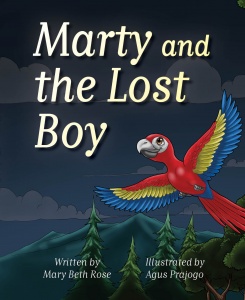 By Mary Beth Rose
One day, after Marty the Macaw sees an adventurous boy on a zipline, he decides that he should try to be more exploratory. That night, he sneaks out of his tree house to befriend the boy. But instead, he encounters a large, worried crowd on the beach, and learns that the boy has gotten lost while kayaking in the ocean! Can Marty help find the lost boy? 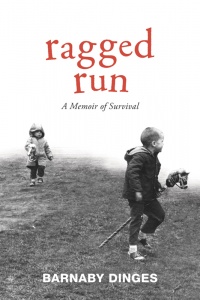 By Barnaby Dinges
It’s the early 1960s in the up-and-coming neighborhood of Lincoln Park, Chicago. Nine-year-old Barnaby Dinges and older brother, Casey, are living a charmed childhood with their stylish mom, Ricka, who has the soul of a great writer; and cool dad, Chuck, a hot-shot advertising exec with a flair for slogans that would make Mad Men’s Don Draper envious. In what seems like the span of a minute, the rug is pulled out from under the two boys as trouble brews on the horizon. That trouble would rob Barnaby and Casey of both parents within two years, but it wouldn’t stop there. Their grave losses would bring the siblings trials and despair spanning the next decade, in the form of a loveless foster family who challenged both Barnaby and Casey to a breaking point…and eventually, to fight back with everything they had.

Ragged Run is a memoir about survival, hope, and the determination to make it through tomorrow. With insight and humor, and aided by Ricka’s journal (found a decade after her death), Barnaby recounts his journey from painful loss, to impermanent hopelessness, to true happiness. The result is a moving tribute to his family, one that will speak to anyone who has experienced their own ragged run through the often trying streets of life. 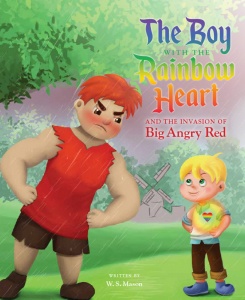 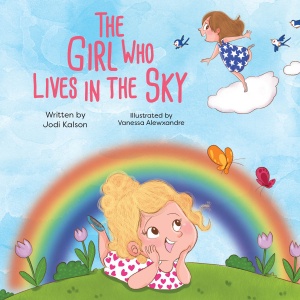 By Jodi Kalson
Two girls were born on the same day, but one goes to live in the sky while the other remains on earth. And even though the girls are not together anymore in life, they’re certainly together in their dreams: from the zoo, to a birthday party, to the candy store, there’s no telling where the girls will go! The Girl Who Lives in the Sky is a colorful, bright, adventurous dream sequence that shows the power of love and connection that continues to exist between two people who are separated far too early. Although the girl who lives in the sky is gone, her presence is still felt and celebrated by those who cherish her memory. 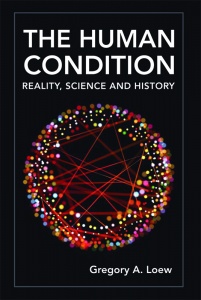 By Gregory A. Leow
Evolution has produced an incomplete miracle: Homo, a species that can love, think, remember, talk, gain insight into reality, plan for the future, and produce amazing scientific knowledge and art. Unfortunately Homo still suffers from dismal weaknesses and is not yet wise enough to protect its species from ultimate demise.
To become wiser, humanity cannot count on natural selection or a revolution. Social and political institutions depend on a system of education that is imperfect. Economic development, while remarkable, is neither steady nor equitable. Technological development is often blind and burdened with unintended consequences. History is chaotic at both the national and international levels. Representative democracy, the best system of government we have invented, is fragile, vulnerable and often subject to paralysis. We need a deliberate plan of action that builds on our intellectual and cultural heritages from philosophers, natural and social scientists, historians, educators, and the ideas of contemporary writers. The Human Condition proposes key elements of such a plan and how we may realize them.
Homo has much work left to become Sapiens. 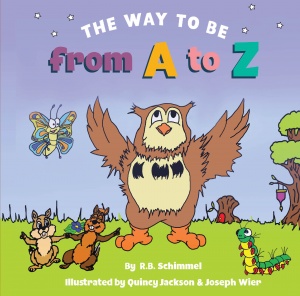 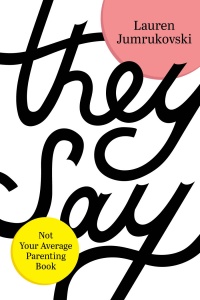 By Lauren Jumrukovski
“They” have a lot to say about parenting, but is what “they say” truly the best way? Who is the ever-present “they” anyway, and how do they know what’s best for your child? With insightful information from a real mom who’s learned how to navigate the hearsay when it comes to parenting, They Say: Not Your Average Parenting Book encourages new parents to trust their instincts, listen to their gut, and keep in mind that what may work for one family may not work for another. With a firmly guilt-free approach and helpful insights on parenting from the newborn stage through the toddler years, Lauren Jumrukovski shares the good, the bad, and the ugly truths that helped shape the practical ideas she offers within these pages. Tackling subjects such as potty training, discipline, breastfeeding, infant and toddler sleep, traveling, and managing relationships within the whirlwind of new parenthood, Lauren shares what worked for her, and reminds parents from all walks of life that it’s normal to question oneself as a parent, especially in the age of social media…but that we don’t have to let our anxieties get in the way of enjoying the large and small moments along the way. Candid, insightful, and ultimately revelatory, They Say is a judgment-free, uplifting guide for parents and parents-to-be, from one mom who’s been there. 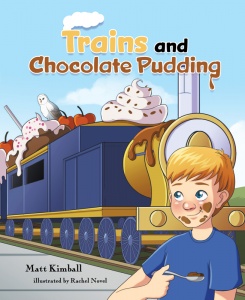 By Matt Kimball
What’s better than trains and chocolate pudding? Nothing! Hop aboard a journey filled with sweetness and adventure that is sure to delight readers of all ages. 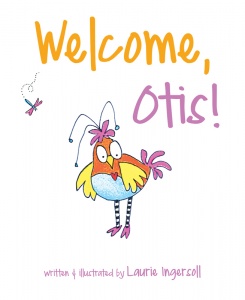 By Lauren Ingersoll
Otis is a wonderful bird with a lesson for us all. He is socially awkward, prone to having monumental meltdowns, and has special needs. He is also so much more than his disabilities, as many other animals soon discover. Otis demonstrates that our differences may be due to what we have, but they’re not who we are. 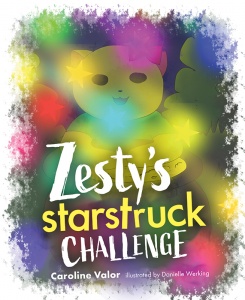 By Caroline Valor
Ever wonder what happens to falling stars in the town of Starstruck? Join Zesty and Gulfer in this exciting adventure as they team up in the Starstruck challenge!