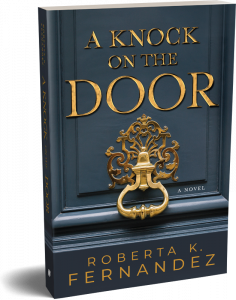 We are thrilled to share a sneak preview of the latest page turner from Subplot, our imprint focused on literary fiction. A Knock on the Door (coming October 2022) tells the story of Lori Crawford, a small town journalist whose world is turned upside down by the death of her husband, Jack. After twenty-five years of marriage, she thought the rest of her life would be spent in an uncomplicated, happy life. But just as Lori feels she’s coming out on the other side of her grief, Jack’s former assistant, Rita Johnson, discovers information that convinces Lori that Jack was murdered.

The two women vow to bring the perpetrator to justice, but time is dwindling, and both of their names are on someone’s kill list…

Rita had been driving for a few hours when she pulled her car into the parking lot of a seedy motel along the edge of the highway. She got out of her car and strolled into the office.

Jacob had left thirty minutes ahead of her, so he should already be at the rendezvous point they had identified from a Google webcam search. She thought she spotted a quick flash of light, letting her know he was parked at a partially hidden spot across the street from the motel.

They had counted on Rita’s phone being tapped, and on Trench Coat Man following her to this place. The red SUV turned off his headlights and pulled in between two cars at the far end of the motel’s parking lot.

Rita told the manager she’d be staying for what was left of the night and leaving later than the normal checkout. He eyed her carefully as she paid with her credit card. There weren’t many people checking in that wanted to stay more than a few hours or that didn’t pay in cash. He figured he’d treat her to one of his nicer rooms in the back.

She emerged a few minutes later with the key to room 183 and spotted the red SUV hiding in the back of the lot. Perfect! She casually glanced up toward Jacob’s car as she got her empty roller bag out of the trunk to signal him that she would just be a few minutes. Jacob kept his eyes trained on the red SUV while Rita walked around the side of the motel toward the rooms in the back.

The smell of cigarette smoke and stale beer overwhelmed her when she opened the door. In the bathroom, she briefly turned on the shower, wet the towels a bit, and put a couple of pieces of toilet paper in the toilet. Then, she walked over to the bed and rumpled the sheets and pillows. The filthy comforter made her gag. She placed a half empty can of soda on the nightstand.

Rita parted the curtains slightly and scanned for anyone loitering. Seeing no one, she used her burner phone to call Jacob. He confirmed that the man was still in his car.

This was her opportunity. She took the roller bag and trotted quickly across the back embankment of the hotel property and over to the next block where Jacob was waiting for her. She crawled into the car and melted into the front seat, allowing the adrenaline to subside. They headed back to Cooperville, wondering how long Trench Coat Man would watch her car in the morning before he got suspicious.

At 8 A.M., the phone in Nathan’s cubicle started ringing. Nathan didn’t have to be psychic to know who would be on the other end.

“Nathan Schilling.” He was completely prepared for how this call was going to go. Stay calm and in control.

“Who the hell do you think you are? Making the deaths of two of my employees a sensational story worthy of the National Enquirer? Where’s your respect? Do you realize that SpringWare is the economic pillar of this community? Run another headline like that, and you’ll be talking to my lawyers!” Mason’s tirade seemed to go on forever. The longer he went on, the bigger Nathan’s smile grew.

Just the reaction I was expecting.

“Mr. Mason? I understand your concern, sir. I think you might be interested in some new information that has come to my attention since I wrote that article. Are you in your office? I’d like to come over and talk to you about it.”

“All right,” said Nathan. “I have confirmation from the ME’s office that George Packwood’s death was a murder, not a suicide . . . that certainly changes things, don’t you think, Mr. Mason?”

“Mr. Mason? Are you there?” Nathan thought for a minute that he might have hung up or passed out.

Without giving anything away, we’ll just say: this is a riveting thriller that will surprise readers at every turn. A Knock on the Door is available for preorder now exclusively through our bookstore and will be available for purchase through major retailers on October 4, 2022. Looking for more stories like this one? Check out our other Subplot titles here.