Skip to content
SUBMIT YOUR BOOK IDEA
The First Amendment of the United States Constitution protects freedom of speech. This principle is one of the pillars on which our country was built. Freedom of speech is not an absolute right as there are recognized exceptions (inciting lawlessness, threats, obscenity, defamation, invasion of privacy, and several others). As related to the world of books, Authors and publishers should be mindful of these issues, but as a general rule, in this country writers can freely express themselves. Keep in mind, your readers, reviewers, and critics enjoy the same freedoms when it comes to evaluating your book and voicing their opinions about the worthiness of your content. Something happened at Mascot Books recently that brought these issues into focus. I’ll start by introducing you to Arnie. Arnie is an adorable rooster that resides at the Center for Animal Protection and Education (“CAPE”) Sanctuary in Grass Valley, California. CAPE co-founder, Shelley Frost, authored Arnie Catches a Cold and in March the book was successfully launched at the Animal Film Festival. 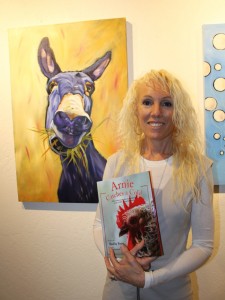 How I came to know Shelley is where this story gets interesting. In 2014, Mascot Books published I Want to be Bacon When I Grow Up by bacon enthusiasts, Ken and Jessica Skinner. The book was intended to be a tongue-in-cheek tale for bacon lovers. Animal rights groups protested the book’s content with reviews posted on Amazon. And then came an online petition addressed to me via Change.org. Then I started getting emails, Facebook messages, and tweets. Most of the messages offered a reasonable but harsh critique of the Bacon book. Some were angry and less respectful. Here’s what one person thought of the Skinners’ book. 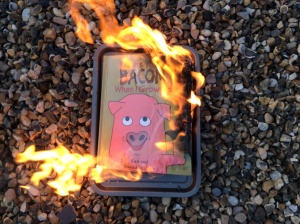 That’s when Shelley contacted me. As an animal rights activist and devout vegan, Shelley was understandably not a fan of the Bacon book. We had a great conversation in which Shelley let me know exactly what she (and others) found offensive about the Skinners’ book. She asked that we consider publishing her children’s book as a way to present an alternate viewpoint. After reviewing her content and learning more about the great work being done by CAPE, it was an idea we enthusiastically embraced. So what are the takeaways from Arnie the Rooster, Bacon, and book burning? First, authors are free to express themselves largely without restriction. Not everyone is going to be interested in what you have to say and, as was the case for the Bacon book, some people may despise your message. That’s okay, too. As a highly respected publishing company, our goal is to help authors bring their books to market in a professional manner. We take great pride in offering a variety of works from people with different viewpoints and we’re thankful to live in a country where free speech is protected and where informative, constructive, and respectful dialogue can occur. Regards, Naren Aryal CEO and Publisher www.mascotbooks.com

4 Responses to Arnie the Rooster, Bacon, and Book Burning