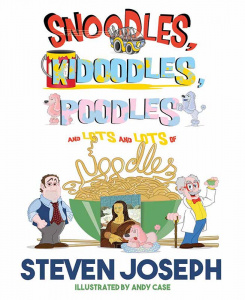 We are excited to feature the soon to be released Snoodles, Kidoodles, Poodles, and Lots and Lots of Noodles this month. Written by Mascot alum and Mom’s Choice Award Winner Steven Joseph, Snoodles is a feel-good story for children age 5-10 that tastes and smells so good they will undoubtedly want more.

Joseph’s newest tale invites readers of all ages to enter a world where imagination is king. In this fantastical realm, crankiness reigns and cars run on sauerkraut. But then comes a new invention: the SnoodleMobile, the brainchild of Herbie Snoodleman. Now cars are powered by noodles, and the delicious aroma produced fills everyone with happiness. Only one person does not appreciate the success of Mr. Snoodleman’s invention: Sour Croodleman, the brains behind the once-popular KrautMobile. When Croodleman decides to seek revenge on his business rival, the unexpected happens. After all, when cars run on noodles, anything is possible!

Children’s author Steven Joseph is a first-generation American, veteran attorney, marathon runner, prolific speaker, father, and modern humorist. He is a true New Yorker and the son of a Holocaust survivor, which directly shapes his written work and social advocacy. Steven is also the author of the Mom’s Choice Award-winning The Last Surviving Dinosaur: The TyrantoCrankaTsuris and A Grownup Guide to Effective Crankiness: The CrankaTsuris Method. His work leans on the concepts of crankiness and survival—which were ever-present in his childhood—and the practice of acknowledgment, which he has learned through his zen practice

You don’t want to miss this one. Stephen’s latest work is delightful, warm, and full of important lessons.