This month we released a very special book that we’ve been working on with an amazing author and all around nice guy. Ryan Haack raised $29,537 through Kickstarter to fulfill his goal of publishing a children’s book – Different is Awesome! This book teaches kids that we are all different in some way and that’s what makes us unique, and of course awesome! The Different is Awesome Kickstarter Campaign raised close to $30,000 from over 500 backers. This not only funded the publishing costs but also introduced the book to readers all over the world.

Ryan has also done amazing things with his websites and social media campaigns to promote the book. He has two websites with active blogs:

Mascot Books published Ryan’s book on July 7th 2015. We’ve loved working with Ryan throughout the project so we’ve invited him to share some of his tips and tricks and tell us about the journey.

On Crowd Funding: Mascot Books: When you were deciding how to publish your book what made you look into Crowdfunding and using Kickstarter specifically? Ryan Haack: I did a LOT of research as to what the costs would be to produce a beautiful children’s book and, as I expected, they were high. Which is totally understandable. I knew that the Living One-Handed community was on-board, but beyond that I believed in the even broader appeal of the book and the opportunity for it to help people everywhere! I chose Kickstarter because I had friends who ran successful campaigns and because I wanted to assume the risk for the project. If a Kickstarter project doesn’t hit its goal, nobody gets charged and it’s basically as if it never happened. You go back to square one and try again. Thankfully, our Kickstarter campaign took off right away and went strong the whole way through! MB: Other than raising money, what was the best experience that came from your campaign? RH: The most exciting part of the process was seeing just how many people were getting involved. I knew friends and family would contribute, but the vast majority of our Kickstarter backers were people I didn’t know! People who heard about the project from friends and their friends’ friends. 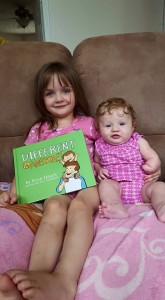 MB: Where did most of the funds come from and what were the most popular rewards? RH: This might actually be the most exciting part for me. Out of the 561 books spoken for during the campaign, 88% of them were purchased by individuals requesting one or two. There were only three pledges over $1,000 and one of them was from the school my kids attend, so it was really satisfying to see so many individuals and families supporting the project! MB: What other advice would you give other authors looking to use Kickstarter to fund publishing a book? RH: I’d say the biggest “secret to my success” was having an existing, engaged audience. Maybe it sounds over the top, but I love my audience like family. They were vital to the success of the Kickstarter as they contributed, but perhaps more importantly, shared it with their audiences. There’s a lot of luck involved in a Kickstarter campaign, but the more existing support you have before you begin, the better your chances. I also had my friend Mike help me create a professional video for the project, which I still get compliments on over a year later. He did an amazing job and it helped potential supporters really connect to the project. On Social Media and Blogging: MB: What types of posts seem to gain the most attention? RH: For me, any posts about parenting or my thoughts about a particular topic that affects those affected by limb-difference gain quite a bit of traction. It seems a bit counter-intuitive, but the more general or broad I make a post, the less people identify with it. I find that when I share about something specific, readers grab a hold of it. MB: When you post what percentage of posts are promotional versus informational fun versus serious? Is that something you pay close attention to? RH: Honestly, I’ve not been very consistent or intentional over the last year or so with my posting. I’ve had a pretty hard year, which has made several of my posts quite emotional and serious (and also shared the most, because again, people identify with those feelings), but I definitely try to keep things light and fun for the most part. I want people to smile and laugh and know things are going to be ok, but I also want to teach and foster conversation. 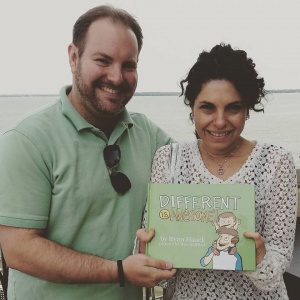 MB: Other than the sites everyone knows about (Twitter, Facebook) are there any other sites or programs you’ve used? RH: Facebook and Twitter are definitely the bread and butter of social media, but I’ve also found Instagram and Pinterest to be rather helpful. I’m also starting to get into LinkedIn more and more, though I haven’t used it much yet. MB: Other than Crowdfunding, Social Media, Blogging, what else have you done to promote the book, what’s worked the best? RH: I was able to get the book into a couple local stores in my town and I was on the news and a radio program on Wisconsin Public Radio so far. I’m setting-up more signings in the area and I’ve been invited to several schools since the book released, which is awesome! MB: Is there anything you’d like to tell our readers about Different is Awesome! and your experience publishing? RH: My hope is that the message of acceptance and celebration of our differences told within the pages of Different Is Awesome! will continue to spread far and wide and affect lives of young and old in a positive way! I’m so grateful for my partners at Mascot Books who helped – and continue to help! – make this dream a reality. 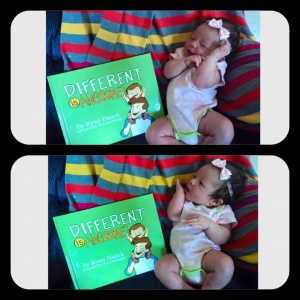 We would like to thank Ryan for taking time from his very busy schedule to share his story and provide priceless advice to other authors who want to get into children’s book publishing.

Congrats on all your success and we look forward to seeing more happy readers of all ages!

Different is Awesome! is available now through a variety of retailers as well as right on this site in our bookstore!