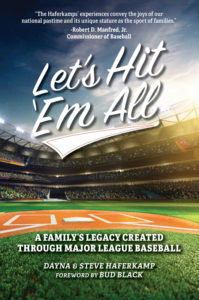 As we prepare for another World Series, it’s worth considering what we mean when we call baseball “America’s Pastime.” Going to a baseball game is far more than a simple trip down to the ballpark. At least for me, it’s a full-fledged experience complete with cheering alongside your friends, chatting among the other fans in the stands, and stuffing myself on ballpark concessions. As a strictly dictionary definition, baseball may be the game going down on the field below, but its heart—what keeps us coming back year after year through the playoffs and World Series—is something much larger. 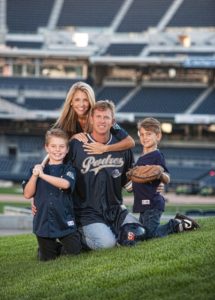 No one knows more about the special place baseball holds in the heart of American culture than Dayna and Steve Haferkamp. In 2008, they embarked on a road trip with a mission in mind—to visit every single Major League ballpark in the country. As told in their book Let’s Hit ‘Em All (Mascot Books, 2016), their journey across America took them from rainy Seattle to sunny Florida, and from the oldest ballpark (Fenway Park in Boston) to the very newest (Marlins Park in Miami). Along the way, they took a couple of detours to sites such as the Louisville Slugger Museum and the Field of Dreams, along with many other baseball museums and historic sites, to make it a true baseball road trip for the ages.

But as the Haferkamps describe it, baseball is much more than just the famous ballparks and museums across America. What made the journey truly unforgettable were the various players, coaches, managers, and other members of the baseball community their family met along the way. For instance, they were privileged to get a behind-the-scenes tour of Sloan Park, during which they got to tour the practice grounds while the Cubs were at practice. In a magical moment, the tour guide turned to their two boys and asked if they would like to go shag balls in the outfield as the Cubs practiced at bat! Unforgettable barely describes the experience. 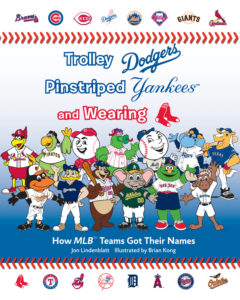 For those too young or otherwise unable to make a grand tour of all the MLB ballparks, Jon Lindenblatt’s book Trolley Dodgers, Pinstriped Yankees, and Wearing Red Sox: How MLB Teams Got Their Names (Mascot Books, 2013) details the surprising and sometimes outlandish history behind the mascots of every MLB team. Just like the Haferkamps’ journey, this tour around baseball’s history often turns up unexpected gems, such as Cleveland having one of the first Native American players, Louis Francis Sockalexis. 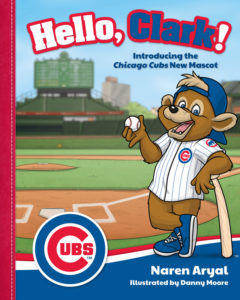 The World Series is a journey of its own. It begins as a dream in the hearts of the players, coaches, and fans at the start of the season and only grows as time goes on, much like how the Haferkamps’ dream grew with every ballpark under their belt. But the World Series journey isn’t simply a count of wins and losses. Its real magic has always been with those who come along on the journey. The magic of the World Series this year lies with the Chicago Cubs. If they win, it will be for the first time since 1908. If you’re a Cubs fan, you can celebrate this potentially historic moment with Hello, Clark!, a children’s book about the Cub’s mascot that is perfect for passing the Cubs tradition on to the next generation of baseball fans! Every year as I follow my team through the regular season and into the playoffs, I inevitably emerge afterwards with a collection of new friends and cherished memories. This is baseball at its very best—bringing people together in a special way—and what keeps me returning season after season. When I sit down this weekend in front of the TV, it will be as baseball is meant to be enjoyed—in the company of friends and family. For more information about the Haferkamps’ journey across America, visit their website at http://mlbjourney.com. -Daniel Wheatley, Production Manager, Mascot Books.