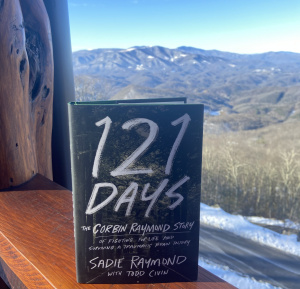 Our February featured title is 121 Days: The Corbin Raymond Story of Fighting for Life and Surviving a Traumatic Brain Injury by Sadie Raymond with Todd Civin!

On the morning of July 4th, 2018, Sadie discovered that her son had been a passenger in a car that had collided with a tree and was on his way to the hospital via ambulance. For 121 days, Corbin fought an arduous battle for his life, and, through faith and love against all odds, Corbin won. Featuring real-time journal entries and contributions from other members of Corbin’s family, 121 Days is a revelatory story of the depth of fear, the duration of courage, and, ultimately, the power of triumph.

We spoke with Sadie about putting such an emotional life event on the page, why she included her personal journal entries, and more!

What inspired you to write about your son’s traumatic, yet revelatory story?

When my son Corbin was at his worst, in a coma, and with no certainty of surviving, I started searching for signs of hope and survival. Anything that gave me the strength to stay positive and believe he had a chance. As much as I dreaded thinking about the physical wounds that were still so fresh, I really believed everything we went through was intended to help others. Our story could provide others with the hope and strength to not ever give up and keep fighting.

In your memoir, you take readers through every feeling and moment that you experienced in those 121 days. What was the process like of taking such an emotional life event and putting it on the pages?

Reliving the events in writing was by far one of the hardest things I’ve done. There were lots of tears and lots of procrastination to get it completed. At times, I didn’t think I had it in me to finish. I had just brought Corbin home from the hospital a few months prior. We were trying to adjust to our new way of life and it wasn’t easy by any means with four children, all the new daily doctors, therapy appointments, and to top it off, Corbin was having health issues we couldn’t figure out. I hadn’t even dealt with all of my own emotions, never mind processed everything we had been through. Yet, I knew if there was a time to do it, it was then when it was still so fresh and raw. I started by rereading all of the daily journal posts I wrote while Corbin was in the hospital. Each one brought me back through the roller coaster of emotions. Every time I wrote, I relived it all. I knew I needed to feel it all over again to give the story justice. I wanted readers to really understand the pain, and in the end, the miracle.

121 Days has many of your journal entries you wrote during that time. Why did you choose to put these in your book?

The journal entries were the beginning of the book before I even knew there would be a book. I started writing them the day after the accident to update family and friends after we received such an outpouring of concern and support that I couldn’t begin to keep up with responding to.

The journal entries became therapeutic to me even though I didn’t know it at the time. I thought I was writing them to our family, our close friends, and Corbin’s friends with no idea of how many people they would ultimately reach. Before I knew it, the site had 50,000 visitors, then 100,000, and then over 300,000. They were such an important part of how the book came to be that I knew they needed to be part of it.

What are some of the most important life lessons you learned from what happened to you and Corbin?

The lessons we learned are endless, although the one that stands out the most is to take nothing for granted. When you come so close to having your whole world torn apart, you learn to take nothing for granted, not even the little things like having the chance to say goodnight or knowing everyone is home safe under one roof. Another critical lesson that made all the difference in our case was being your own advocate. I think it is an important lesson in life but especially when it comes to our medical care. We have choices of where we get our care, who provides us with the care, and to go somewhere else and get a second option if you aren’t happy with the answers you’re getting.

What advice would you give to parents or anyone who has a loved one battling for their life?

Don’t give up! From day one I was faced with being told to say goodbye, followed by one negative test result after another. The negativity surrounding Corbin’s outcome was never-ending, but I refused to believe it. Day after day, sitting there watching him in a coma, I still talked to him like he could hear everything I was saying. I kept his room filled with positivity. Nothing was going to stop me from giving him every chance he could to recover fully.

This memoir isn’t just about Corbin’s miraculous recovery, but it’s about your resilience and love for your son. It’s also about how a community of supporters gathered together to find strength and hope while Corbin was in the hospital. What do you hope readers will walk away with from your memoir?

We were lucky to have so many people rally around us. Our family, friends, and community were absolutely amazing in how they helped us. Lots of my strength came from all of that love and support. My children have always been my whole world, so when faced with having one taken from me, I learned a whole new level of strength most won’t ever have to discover.

I hope our book gives people strength and hope. I think our story can relate to so many people facing so many different trials and tribulations in life. Hopefully, most people won’t ever experience something so terrible, but no matter what it is you’re going through, I hope our story will give you this: the strength to keep fighting, the hope that sometimes miracles do happen if you keep fighting, the reminder to stay positive, and the courage to not ever give up.