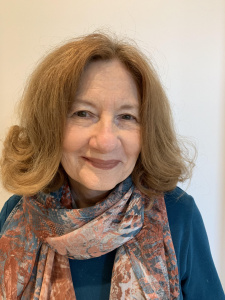 One of our flagship Subplot Publishing titles, Sainted In Error, was featured on our blog recently—but now it is time to get to know the author behind the novel. We interviewed Glenda Winders on writing the book. Our Q and A with her is below.

1. Sainted in Error is very different from your first book about long-kept family secrets, The Nine Assignments. What was the inspiration behind this plot of murder, friendship, and mental illness? What were some of your goals with this book?

Sainted in Error was inspired by close-up experiences with undiagnosed and untreated mentally ill people. Often such people ruin their lives and the lives of the people around them either by refusing to seek help because of the stigma attached to that type of disorder or by finding help with underqualified practitioners. One of my goals was to draw attention to this serious problem, and the other was to tell a compelling story. We hear of so many cases where unstable people commit murder, and that suggested the vehicle of a murder mystery.

Writing it in reverse, with the reader knowing on the first page who the killer is but waiting until the end to reveal the victim, allowed me to track the psychological development of these two women and other characters in the run-up to the event. My hope is that readers will realize that our attitudes toward mental illness are Victorian and also that its treatment should be as unremarkable as that for a physical ailment.

I also believe friendships are undervalued in our busy society, and the book is a bit of a shout-out to the close friends in my life who have been as loyal to me as Maggie is to Cynthia.

2. How do current events play into this theme and what are some of the ways that mental illness is stigmatized in conversation today? Was there any research involved?

Mental illness continues to be stigmatized in our society in so many different ways. In many professions, for example, people can lose their jobs if their employers learn they are being treated psychiatrically, so it becomes something to hide, which restarts the cycle of stigmatization.

The subject comes up wherever people gather and get to know one another – be it in a neighborhood, the workplace, or on a dating site. It comes up a lot in the news because of all of the horrible crimes committed by mentally ill people – mass shooters, people who kill their own families, killers who believe someone is telling them to do it, and the like. Fortunately, more celebrities are speaking out about their bouts with depression, eating disorders, and many other issues so that their fans can see that talented people have the same types of problems they have and that they have taken action to get their lives back to where they want them.

I did a great deal of reading on different mental illnesses because there are so many possible diagnoses and so many overlaps of symptoms. I wanted to make sure that my character was accurate and believable. We know that Cynthia’s mother was bipolar, but we’re not sure if this is her problem or if it is something else. What we do know for sure is that she desperately needs help but refuses to seek it because she is embarrassed. 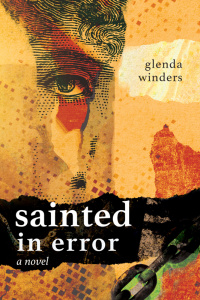 3. Sainted In Error spans decades of friendship between two characters. What was your process of developing Maggie and Cynthia as characters over a lifetime? How do you stay organized with your chronology, and do you have any advice for writers working with long periods of time?

I’ve heard it said that in fiction everything is true and nothing is true, and I think for the most part that is the case. Maggie and Cynthia are bits and pieces of people I have known, observed, and read about over the years. Because I do have long friendships, some of which date back to grade school, I know the shapes and dynamics friendships can assume. They are very much like love affairs and marriages – sometimes one person cares more than the other or sometimes one has a hard time celebrating the other’s successes and good fortune or dislikes being in the shadows while the other takes center stage. Healthy relationships find a balance; unfortunately, this isn’t the case with Maggie and Cynthia.

This question makes me laugh because I am the world’s worst at keeping up with chronology. I am more concerned with moving the plot forward and sometimes don’t pay enough attention to important details – such as what year it is and how old the characters are. I’ve had wonderful editors who have saved me in this regard, and from them, I have learned to keep a timeline from the very moment I start writing. I do that by way of a spreadsheet that keeps track of everyone’s ages, also by reading about – or remembering – what was going on in the world at a certain point in the character’s experience.

4. The opening scene starts with Maggie deciding what to wear to the trial. Why did you decide to begin the story this way, and what influenced you to make clothing a symbol throughout the book?

Like Maggie, I once read or heard that women always remember what they were wearing at important moments in their lives, and I know that’s true for me. That line may have come from the play Love, Loss and What I Wore (based on the book by Ilene Beckerman), in which Nora and Delia Ephron explored the same topic. The first thing many of us – men and women — think about before a special occasion is what we’ll wear, and that would certainly be true if one were about to testify at her best friend’s murder trial.

Because I think clothing is important to most women, I kept going on that theme throughout the book – what Cynthia wears the night she and Richard go to the fraternity dance, what Richard’s mother wears to their wedding, what Kim has one the first time Maggie meets her. And, of course, I owed it to the reader to disclose what Maggie finally chooses for the day of the trial. The flip side of that, though, is that clothes are not the measure of who people really are. Maggie is embarrassed about the clothes she wears while Cynthia has an expensive wardrobe, but look at what she is wearing the last time we see her. 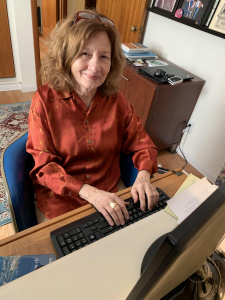 5. Which character do you see yourself in the most and why?

I suppose I most resemble Maggie in that most of my career has been spent in journalism. I also have unruly red hair as she has, and as a teenager, I was often the sidekick of the more beautiful girl who got all of the attention. I am also tenacious in relationships and have a hard time letting people go.

6. What’s next for you? Any books on the horizon? What other kinds of plots or storytelling would you like to explore?

I am working now on a novel tentatively titled “Peculiar.” It concerns three women who live on a lake and protect an old secret until the curious new wife of one of their sons wants to learn more about her husband’s background. It is multicultural and explores themes such as the nature of truth and – again – the importance of communicating and not making assumptions. I love stories that involve time travel and have tinkered with that in a novel that is finished but I haven’t yet sought to publish. I have written a lot of short stories and some poems, and I write nonfiction for several magazines and newspapers. While I am constantly striving to get better at my craft, I am pretty happy with things the way they are.
Glenda Winders is an award-winning fiction writer, editor, and journalist, whose work has appeared in major magazines and newspapers nationwide. Her first novel, The Nine Assignments, was published in 2016. She lives with her husband in Columbus, Indiana. Learn more at: www.glendawinders.com