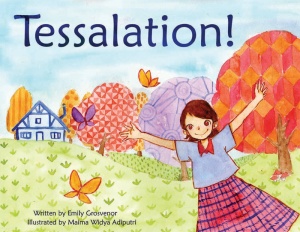 It’s not complicated – I am the first person to announce to the world that my children’s picture book Tessalation! happened because of the quality of the illustrations. Without stunning illustrations, Tessalation! would never have had the incredible life it is having, first on Kickstarter and now in publication. I never planned to self-publish. In fact, I think my book would have languished in my desk for the rest of my life if I hadn’t seen one of those deceptive Facebook ads for writing webinars promising to show you how to write a book in 24 hours, publish it on Kindle and watch the money roll in. I had written the text for Tessalation! about a year and a half previously and the draw was palpable. Maybe I could just publish the thing, get it out in the world and see what happens? Webinars like these tend to over-promise and under-deliver. But it planted the seed in my mind: What if I just hired someone to illustrate my existing book? I had worked with Fiverr.com on some projects before, simple logos for other websites and projects I have. The Fiverr site has an entire subcategory devoted to children’s book illustration. That’s where I started, exploring the existing offers and the sample work of illustrators around the world. My book is a math story book about a little girl who hides in tessellations (repeated mosaic patterns). I knew I wanted the illustrator who worked on Tessalation! to work in watercolor – my personal preference for children’s books – but I also knew she would have to have the skill to render the tessellated pages.   It took me five minutes to find my illustrator. Taigabluet has a lovely, Manga-influenced style, depicts children in an engaging way, and her logo was a snowflake design. Later, in our conversations, I discovered that she is studying arabesque, a pattern-making technique. In other words, it was a love match from the start for us. Within an hour, I had fine-tuned my text and ordered four sample pages from her. I paid about $25 per page for each of the illustrations and more for the cover. But honestly, I started paying her more because I adore her work and believe in her talent. Pro Tip #1: Always order sample pages to see if the illustrator will be able to render your book in a style fitting with your vision. Making Illustration Notes I didn’t give Taigabluet a ton of illustration notes. I requested that the little girl be half-Asian and that she be hiding in the tessellations with room of the pages cut out for the text. In my book, respecting the artists means understanding that the end-product is a collaboration. What I have in my mind as I write is not what readers have in their mind when they read. I was intent on allowing the illustrator to do a certain level of interpreting. Pro Tip #2: A good illustrator will elevate the text beyond the writer’s best imagining and add value to the project by not taking everything literally. Then something amazing happened. The first few pages she sent me completely slayed me. Here’s what they looked like. 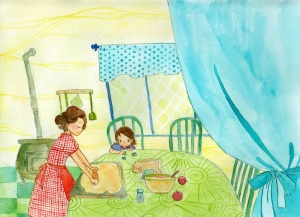 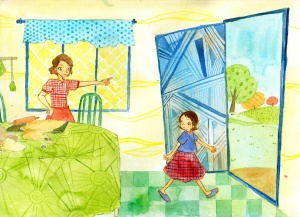 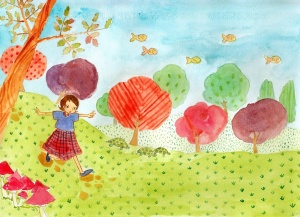 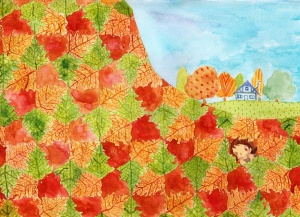 Tessalation!, p. 4, ©2016 Emily Grosvenor       I couldn’t stop myself. I post a few of them on Facebook, just to let people know what I was up to and share in my joy of getting such awesome work. Then the next amazing thing happened. My friends and family so loved the images they were already asking me if they could buy it. A friend of mine who runs WaldorfBooks.com even asked if she could carry it in her online store. Pro Tip #3: When the market speaks, you listen. Share your illustrations throughout the process and involve the crowd! I ordered the rest of the pages to be illustrated and spent the next few weeks waiting and wondering what this would become. But it wasn’t long before two of my very good friends mentioned that my book was a perfect contender for Kickstarter, the crowd-funding platform. Kickstarter is an entirely different bag of beans I’ve explored in other posts. Suffice to say that if regular Kickstarter supporters say you’d be a great fit, your chances are good. But back to the illustrations. I think it’s important to see just how the image can elevate the work, so I’ll write briefly about one of my favorite pages, p. 3.

Tessalation!, p. 3, ©2016 Emily Grosvenor     In my notes to Taigabluet, I mentioned that in this page, she will be heading outside, where, on the following pages, she encounters mushrooms, fish, leaves and turtles. My sole hope for this page was that Tessa would look excited to be going outside, maybe a little worried, and that the colors reflect the color palette on the rest of the pages. Taigabluet, in her wisdom, made it even better. This page foreshadows the rest of the book but including those elements that will appear later. It also has a slightly surreal feeling to it – fish in the sky! – but it works because it reflects how children might see, remember, or experience the outdoors. The color palette is unexpected, natural but somehow also dreamlike. As you can tell, I am love with this page. Pro Tip #4: The illustrator’s vision should be separate from your own, and that’s okay. That’s where the magic happens! I didn’t always know what questions or notes to make for the illustrator, and if I had to do it again I would be more clear about where I wanted the text to appear on the pages. I ended up hiring my brother-in-law, Jeff Diesburg, to do the graphic design marrying text to image. 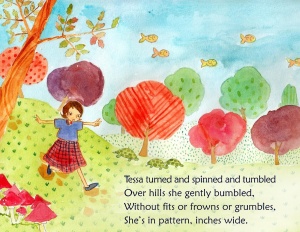 Tessalation!, p. 3, ©2016 Emily Grosvenor     Jeff lightened up some of the areas where text appears, picked the gorgeous Maiandra font we used, and did the tessellation tutorial that appears in the book. Pro Tip #5: Give credit for all of the hard work that goes into a book. I am so thankful to Taigabluet and to Jeff for making this book a reality. It would not be a book without them. So my final tip for working with an illustrator/ graphic design is to remember that they are as much the creators of your book as you are. Compensate them fully and thank them wherever you can by adding links to their sites, including their information in all of your promotional materials. Help them promote themselves whenever you can.