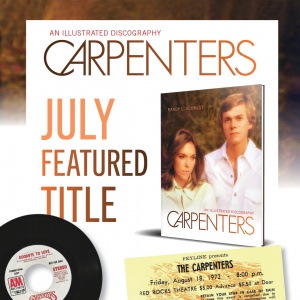 From author Randy L. Schmidt:
The Carpenters were the top-selling American musical act of the 1970s, crafting love songs that defined a generation. With a trademark sound masterminded by Richard and powered by Karen’s distinctive velvety alto, songs like “We’ve Only Just Begun,” “Rainy Days and Mondays,” “Superstar,” and “Top of the World” elevated the sibling duo to worldwide popularity and eventual record sales of more than 100 million.

Today, some fifty years after their emergence, interest in Carpenters music lives on, as evidenced by the numerous documentaries, tribute acts, and music reissues, including a new album featuring their classic recordings accompanied by the Royal Philharmonic Orchestra and conducted by Richard Carpenter. It’s clear that the essence of the Carpenters’ appeal remains their recordings. And it is those recordings that we celebrate and explore in this new book.

I enlisted thirty-three diverse and knowledgeable commentators—authors, journalists, musicians, producers, recording industry executives, and other Carpenters enthusiasts—to bring this retrospective to life. Teams of three or four experts were assigned to each album and the listening, planning, and researching commenced. The ensuing discussions with me as moderator were recorded, transcribed, and finessed into the chapters contained herein.

In-depth, insightful, and opinionated, these reviews explore all ten “official” Carpenters studio albums recorded during Karen’s lifetime, four posthumous releases of extras and outtakes, a hits compilation, and the solo albums. Contemporaneous reviews and personal reflections from Karen, Richard, and others are also included. It is my hope that, collectively, this material and the selection of images will make Carpenters: An Illustrated Discography a cherished part of your collection.

And now, let’s journey through several albums from the Carpenters discography and enjoy some of the rich commentary from the book:

OFFERING (1969)
To make a Beatles song your own is impressive. “Ticket to Ride” is immediately likeable. You want to hear more from these people. It’s another example of their ability to put their own stamp on things and their willingness to change the harmonies a little bit and make the song their own.

Theirs was a sound that no one had really heard before. The essence of who they were was in the DNA of every song. It was truly them. People were hearing Karen and Richard—the artists—and not some record company construct.

Karen was the Adele of her time. Adele’s fantastic, but Karen really had tremendous pain that went beyond romantic pain as a subtext. Richard’s arrangements sometimes made things a bit too big and glossy, but Karen’s voice and emotions punched through all that and said, “This is real.”

Other versions of “A Song for You” were more like sketches, but Karen took the song and went over those pencil drawings with a clear, black ink pen and carefully painted the image exactly as it should look.

I met the Carpenters when I was seven when they played the Westchester Premier Theater in New York. I watched Karen drum during the show and remember walking away saying, “That’s amazing. That’s what I want to do.” And I started taking lessons when I was eight years old.

Being a trans kid, there was something missing. But I felt that Karen Carpenter understood that. For the geeks, misfits, and outsiders, we felt a recognition and intellectually grasped something that a lot of people listening to her songs probably didn’t even think about.

HORIZON (1975)
As far as an exhibition of Karen’s skills, the Horizon album is the best. It had never happened quite like this before, and it never happened again in the same way. This is as close to perfect as a recorded voice can be.

Working in opera, as I do, the thing one looks for in a singer is a sonic imprint. You can tell who it is in just one note. All of the great popular singers had that as well, but no one ever had a more distinct sonic imprint than Karen Carpenter. You knew who it was immediately.

This album strikes me as a well-intentioned overreaction to A Kind of Hush, which was the Carpenters at their softest, most pristine sound. I think they were trying to find material that would strike a lot of people as unlikely, with “Calling Occupants” being the epitome of that.

It’s striking how cinematic this album is. It’s not just a collection of songs. Instead, it’s as if we’re experiencing a movie and the whole spirit of Christmas is being expressed through these various scenes. The Carpenters really got the feeling of Christmas right.

In music and perfume there is a thing called “the opening note,” which sets the tone for what is to come. And putting “Those Good Old Dreams” in this first position was very deliberate and a wise choice. This new classic set the tone for the rest of the album.