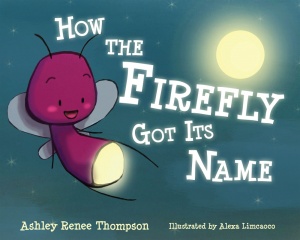 Books are written for innumerable reasons; to teach, to entertain, or possibly to raise awareness about a person or event.  Some are written totally by chance without the intent of ever being a book.  That was the case with How The Firefly Got Its Name!   How The Firefly Got Its Name was written in 1999 when Ashley Renee Thompson was twelve years old.  Ashley was a lover of the Latin language as well as Greek and Roman mythology.  In her 7th grade Latin class she was given the assignment to write an original fable incorporating mythology.  I remember her sitting curled up among pillows on her bed writing her fable.  She loved fireflies, sometimes called lighting bugs, but was never interested in “catching” them. She merely loved watching them twinkle and fly about.  So, Ashley decided that her fable would tell the tale of how the little firefly got its glow and thus, its name. 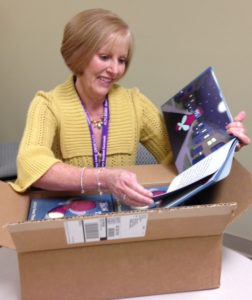 The enchanting story begins with little Hermi, the apprentice to the messenger god Hermes, having difficulty completing his duties. Night after night, Hermi would try to deliver messages from the gods to the mortals living on earth. However, he had so much difficulty seeing where he was going that the gods decided to intervene, giving him a wonderful gift! Without even knowing it, Ashley wove her own values of determination, perseverance, and always wanting to do her best into the story.  Her wonderful sense of humor shines through as bright as Hermi’s new glow!  I remember thinking how enchanting the story line was and that it would make a great children’s book.  Ashley’s Latin teacher was taken with the fable as well. She insisted that Ashley submit her assignment to the Virginia Junior Classical League Latin Convention.  It ended up winning first place in the fable category! A few years later when Ashley was in 10th grade she was killed in a vehicle crash.  As I was going through her school papers I found her fable with the A+ written on top.  I decided then to publish her story so that children could enjoy little Hermi and learn how he got his wonderful little twinkle.  I have discovered that children of varying ages enjoy the story.  The younger ones enjoy little Hermi and the eye catching illustrations while older children (up to 3rd and 4th grade) enjoy the subtle humor and introduction of mythology. I also wanted to publish the book as a way to raise additional awareness of the risks of teen driving by helping to fund Ashley’s foundation: The ART of Driving. This non-profit, founded just after Ashley’s death, works to raise awareness among teens and parents of the unique risks faced by young drivers and how to minimize those risks. So while I found the endeavor of publishing a daunting task, I was determined to find Ashley’s book a home. 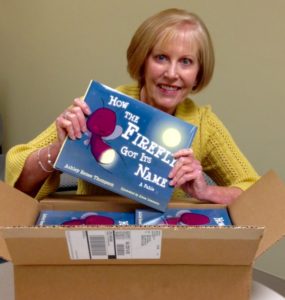 Finally, a friend told me about Mascot Books.  After speaking to Naren things began to move quickly!  From the very first time I read How The Firefly Got Its Name! I could visualize Hermi and how the book should be illustrated. It was important to me to find an illustrator who was willing to work with me, share my vision and bring the fable to life!  I had a close friend whose daughter was a very talented artist.  I knew Alexa Limcaoco was the one to illustrate Ashley’s story. Alexa was only seventeen at the time but she immediately grasped my vision. We sat with Ashley’s manuscript and I marked where I thought the breaks should be and we discussed the general theme to each illustration. I let Alexa “run with it” and I am so glad I did.  I could not have been more pleased with the final result and so was Mascot.  Alexa also had the insight to illustrate end pages with peacock feathers to pick up on the story line of Hera and her lost peacock that Hermi helped to find due to his new found glow! I am thrilled to see Ashley’s sweet fable that started as a homework assignment turn into a beautiful hardbound book that I know she would be proud of.  All proceeds from sales go the Ashley Renee Thompson Memorial Foundation to support its educational programs and annual college scholarship that is given in Ashley’s memory.  Her legacy truly lives! -Robin Thompson