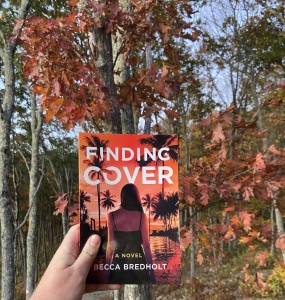 Our October featured title is Finding Cover by Becca Bredholt! Praised as having a “natural and easy storytelling ability,” Becca is an award-winning poet and writer who has been featured in many notable news outlets, such as Huffington Post, Yahoo Travel, and Orlando Magazine.

Finding Cover is a romance story gone wrong. Having met only days before, the young, doe-eyed Crystal Vargas elopes with a dashing Brit named Duncan Douglas who appears to be everything she’s ever wanted. Without realizing it, her desperation to be loved plays well into the hands of her new husband, a cunning sociopath in need of an American bride to help him maintain appearances. 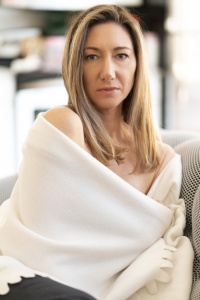 Prior to writing Finding Cover, you began your career in editorial writing and you were even on a TV show. What made you shift gears and write a romantic thriller?

Writing Finding Cover wasn’t a shift of gears for me. It was a breakthrough in discipline that should have happened years ago. I’ve always been a writer— I just couldn’t formulate an entire novel the same way I was able to hatch a complete poem or short story. My career has been a series of jobs I took to pay the bills that ended up taking up more time than anticipated, leaving me less time to sit down and write a novel.

What are the storytelling and/or writing techniques needed to write a thriller? In other words, how do you create suspense?

I took the basics of suspense writing from all those years of studying mysteries and action-adventure movies. If you read Agatha Christie or Sir Arthur Conan Doyle, or even if you read the Nancy Drew series and watch any Hitchcock film, you’ll understand what is needed to write a thriller.

First, you have to make the reader care. If the reader doesn’t care what happens to your character(s), then there is no point in suspending the action long enough to ignite their imagination as to what might happen next. That’s the trick— the reader’s imagination of what might happen next is always going to be just as powerful, or even more powerful, than what actually happens next. If the writer lets the moment hang just before a dramatic shift is in the balance, that creates suspense. The writer can let the moment hang or pause by either ending a chapter and going to a different scene or moment in time, or letting the reader in on a fact the character is still unaware of. There are several ways to create suspense. In Finding Cover, I tried to use all of them because the novel was not just a psychological thriller, but also an action-driven story.

Writing a thriller or suspense novel is a challenge because the story has to layout the architecture enough so that the reader knows their way around, but not reveal too much so as to give away what the end result will look like. If you build one section too early, that might happen. Everything has to unfold in the right order. My novel had the added challenge of unfolding in chronological order through the lens of three different characters. The reader is aware of what each character is thinking and planning but has no idea how these plans will collide. Each plan has very serious consequences yet none of them are aware of what the other is scheming.


Your book is highly reviewed by a New York Times bestselling author and other writers. Do you have any tips for getting reviews?

Make friends with talented people and stay in touch over the years. The hardest thing is that you can’t go back in time and do things differently. Make strategic choices now about where you invest your time, and with whom. It’s almost inevitable that talented and successful people are drawn to each other. They appreciate each other. When Tennessee Williams was hanging out in New Orleans, he met up with other writers. Eudora Welty was there. George Eliot and Harriet Beecher Stowe were good friends.

I’ve produced short films at film festivals in San Diego and Silver Spring, and even during COVID, I’ve been joining Zoom calls with other women who read their plays to each other. I feel drawn to these communities and these efforts because I am a storyteller. I also have a darn good eye for talent, so when I see it in other people, no matter how raw, I want to work with them. This was the case with the New York Times’s bestselling author who was kind enough to endorse my novel. He used to be one of my freelance writers when I was a magazine editor. He was full of potential and I wanted to encourage him and support him. I still do. He’s a great guy. He just happens to be sort of famous now also. Sometimes that happens to talented people. Sometimes it doesn’t.


The main character, Crystal, is reviewed as a sympathetic and tragic character. What are the secrets to developing relatable, yet multidimensional characters?

Keep it real. The first rule of writing is to write what you know. Or at least write what you think you know and learn how much you really don’t know. It’s not really a secret that Tennessee Williams’ sister was bipolar and the main character in Glass Menagerie had mental and emotional swings like a pendulum. Real people are multidimensional. Unless you’re writing a graphic novel, write about real people. Do this even if it’s just one aspect about them that is real and fit it inside a character who is not an actual person.

Think about someone you work with and are probably only seeing one side of. Then take a look at this person’s Facebook page or Instagram feed. The professional side of a co-worker is like a lot of characters I see on TV shows. The person on Facebook is still not revealing everything, but it’s another layer. Fictional characters have dimensions beyond that, and so on.

As for being relatable, that will happen as you write about people you know because odds are we all know someone who is similar. Unless you write about Chrissy Teigen. I don’t know anyone like her.

I’ve had people tell me they want to splash cold water on Crystal. Some even had to put the book down for a minute because she frustrated them so much. This is good because somehow I made them care about her, even though she was tragic. It helped her cause to be able to see her through other character’s eyes. Even though this novel is a romantic thriller, I didn’t want to romanticize her.


Finding Cover is part of the New Adult genre. What are your thoughts on this up-and-coming genre and how will your story’s plot appeal to these specific readers?

I always thought Finding Cover would have to be in a new genre. When I wrote it in 2005, New Adult did not exist and so no publishers would touch it. They didn’t have a genre in which to market it, so they didn’t want to take it on. I love that New Adult is a genre now because I feel like it encapsulates so much more than one thing. I think it is inclusive of any story where things are new and there are no boundaries, no conventions. Exciting things happen when given that kind of freedom to explore. Tragic things too.

Readers who are open to New Adult books are going to be more open-minded about what is going to happen in a story. Their approach with diving into these books is less about how they want the book to make them feel and more about the book making them feel something. I’m sure my novel does that, so I think it will be well received.


What do you hope readers walk away with after reading your book?

I hope they walk away hoping for a sequel. The end of Finding Cover is really the beginning of a journey for Crystal, so my hope is that some readers will want to follow along. I also hope I find the discipline again to sit down and finish it!

I wanted Finding Cover to be a great beach read. It’s not a deep, philosophical book, but it does have deeper, darker themes running through it. I keep hearing that it is a quick read, which is great because it took me so long and so many drafts to get it right. That means I didn’t slow the reader down anywhere with red herrings or things that didn’t make sense. That should make any editor happy.

I do hope anyone struggling with verbal abuse or gaslighting has their eyes opened a little bit. Crystal’s story is meant to be a wake-up call for young women caught in a cycle of relationship patterns they need to break. That part of this fiction was very real.

I also wanted to break down the conventions of what a good book could be, what it has to have in it, and what it’s not allowed to have. I wanted to write a book that was my voice, my story, my style but still reflecting the very hard work of writing as a craft. I hope I accomplished that and a few people enjoy reading it.