Skip to content
SUBMIT YOUR BOOK IDEA
By Emily Evans-Miller

CTE (chronic traumatic encephalopathy) is a hot-button topic in the sports world. From the mildly concerned to the downright panicked, misinformation is spreading like wildfire. Merril Hoge, former NFL player and author of Brainwashed: The Bad Science and the Plot to Destroy Football, shared what motivated him to speak out against the crowd. 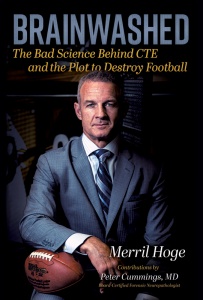 You contend that much of the science demonstrating the prevalence of CTE is flawed. Is CTE itself a real condition?

Something causes clumps of tau protein to form around the blood vessels in the brain in some people, so in that sense, yes, CTE is real. But we don’t know what causes those clumps to form, what clinical symptoms they might lead to, or how much tau in the brain actually qualifies as CTE. So, while we can say that CTE exists, it would be fair to say that we don’t actually know what it is.

Hasn’t the CTE discussion lead to better protection for young players and the development of a safer sport?

Yes, but we were having these conversations before CTE hysteria set in. Youth football has always been concerned about making the game as safe as possible, but in recent years a lot more attention has been paid to how often kids practice, how often they engage in contact, and how their equipment can be improved because parents saw the injuries—not because they read the studies. I think it’s safe to say that youth football is the safest it’s ever been.

You prematurely retired from the NFL due to post-concussion syndrome and testified in front of Congress regarding concussions in football. Most people would expect you to support current CTE findings, like those coming out of Boston University. How did you end up on the other side of the debate?

I saw the hysteria surrounding the suicides of guys like Junior Seau, fanned by sensationalist coverage in venues like the New York Times, and started wondering what was going on. Then I saw the attacks on youth football, which is something really positive for kids’ well-being at a time when too many kids don’t get enough exercise, so I did something a lot of folks haven’t done: I looked past the scary headlines. And what I found was a lot of questionable research and conflicts of interest. Good science was being bulldozed by greed and personal agendas. The more I started talking to people about my doubts, the more people I found who shared them.

You’re a renowned youth football coach and one of the developers of the “Heads Up Football” safety protocol. What would you say to parents who are nervous about letting their child play?

Ask questions of your league and coaches. How often do teams practice? How often do practices include contact? What’s their concussion protocol? Do they have a certified athletic trainer on hand at games? Information is the antidote for fear.

Head injuries happen in all contact sports. Why is football catching most of the attention when sports like hockey, soccer, and rugby frequently cause head injuries in both young and professional athletes?

Money and PR. Pro and college football are massive businesses, and there’s big money involved in suing the NFL or NCAA. And as popular as Pop Warner and high school football are, if you want to get your name in the papers, attack youth football as a whole—that’s what organizations like Faces of CTE have done. Nobody’s getting rich or famous going after rugby.

You’re not a doctor. How did you approach the research for this book?

I was fortunate enough to have an experienced investigative journalist help me build an interview list, track down studies, and generally work with me to figure out what lines of inquiry we needed to follow and which ones were rabbit holes. I also had the help of Dr. Peter Cummings and Dr. Joe Maroon in making sense of the science. This was a collaboration.

CTE has been a topic of popular conversation since the early 2000s. Why publish this book now?

Because, thanks to the internet and 2017’s infamous “110 out of 111 brains” story in the New York Times, the panic among parents, legislators, and the general public is getting worse.  Nobody else will speak out, but I have insight and evidence on this story that few people have. I hope Brainwashed will encourage those who have been reluctant to speak out to finally make their voices heard. 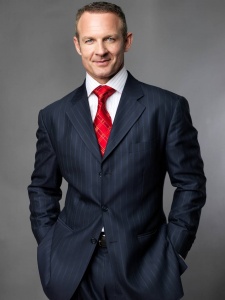 Merril Hoge is a former NFL running back whose career was cut short after back-to-back concussions and improper treatment forced him into early retirement. After a long and difficult recovery, Hoge became an ESPN broadcaster and a tireless advocate for player safety. In 2009, he testified at a congressional hearing on football head injuries, and later became a member of the NFL Mild Traumatic Brain Injury Committee in 2010. When his son expressed a desire to play the game, Merril began researching CTE and working with USA Football to implement the Heads Up Safety Protocol, which teaches coaches safe playing techniques for all athletes. His quest to discover the true implications of CTE prompted the questions that eventually became Brainwashed. Hoge worked as an analyst for ESPN for twenty-one years, helping launch ESPN2, NFL Live, and Fantasy Football. In 2018, Hoge helped launch Your Call Football. He is also the author of Find a Way: Three Words That Changed My Life.   Brainwashed is the first work published by Mascot’s new Business, Politics, and Current Affairs imprint, Amplify Publishing. Learn more about Amplify and their upcoming titles here.   Brainwashed in the News: PR Newswire Op-Ed: How one flawed study and irresponsible reporting launched a wave of CTE hysteria