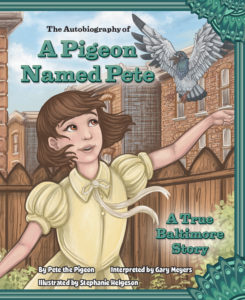 I’m NOT an Author, and Here’s Why

by Gary Meyers   I didn’t start out to write a book. I am not a good writer and I don’t even like to read for pleasure. I had to do too much technical reading for my job over 42 years and found no enjoyment in reading. I would rather be outside doing something…anything. After I had The Autobiography of a Pigeon Named Pete published, my friends said they had never seen this side of me before. That’s because there is no “this side!”  So why did I end up with a children’s picture book? And how? The Why: It started in the summer of 2014 when I was visiting my sister’s place in the California high desert, which we have done for the past several years. She was in the middle of going through old family pictures to sort and send to our relatives (who are also in their 70’s plus), whose children would have more interest in them than our own. During this, she showed me a couple of newspaper articles associated with our mother’s pet street pigeon Pete, who lived in South Baltimore from 1919-1944. I had seen two of the articles before, but she had at least one I hadn’t seen. She said she had more of them, along with pictures and other documentation, back in her winter home in Palm Desert. I decided that I needed to document what we knew about Pete for our children and grandchildren so the story was never lost. I started immediately with what information I had, but I had to wait until October when my sister returned to her winter home for her to send me the additional information. From the complete set of five newspaper articles written about Pete, my mom, and her family, and from some stories our mom had told us about Pete, we were able to recreate the factual story about Pete’s life as best we could and finished the initial script in the late fall of that year. It was then that we decided this “love story” needed to be shared with others, and I began to explore options to have it published. Pete and my mom lived this story! I didn’t have to create any of it since it’s all true. That’s why I claim that “I’m NOT an author!” I just had to organize the written material and make the rest happen! It was to be a tribute to Pete and my mother! Not a new career or a money-making endeavor.

The How: It did not take me long until my head was swimming with information overload from the Internet on ways to accomplish this book publishing thing. I learned early on that publishing in traditional ways was very difficult (I would need an agent to even get the script considered). I also read that getting the book in print was just the start of the book process and not thinking about advertising and distribution was short-sighted. I stalled for over 4 months trying to decide on self-publishing and associated implications. After I got a second wind, I stumbled on hybrid publishing options. After about 1-2 months of Internet researching I found one that seemed promising (Mascot Books), but it seemed almost too good to be true. It had a list of services I knew had to be covered based on my research, and for a price that seemed reasonable. Since I knew absolutely nothing about the business, I needed all the help I could get. And since this was a one-time shot, I didn’t even want to know about all the details.  Just feed me the next hoop I had to jump through…one at a time! 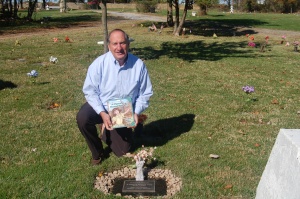 The Proposal: And so we started in the spring of 2015. Mascot’s Marketing Manager took me through the various options I needed to decide up front, explaining the implications of each and making recommendations along the way based on their market research. I took their advice on every front and haven’t regretted any of my decisions. The proposal was very clearly worded, detailing all associated costs, and there have been no surprises along the way. And I was to have complete control on all wording and illustrations!   The Script: I was assigned a Project Manager/Editor. The first item on the agenda was to shrink my 2,000 word script of Pete’s entire lifetime down to 900 words so it would fit into a children’s picture book. Not having any idea of what was required to do this, my Project Manager asked if I would like her to take a shot. She picked the events in the original script she thought would be of most interest to children and then gave me a sample edit, which I liked and asked her to do the remainder of the book. After a couple of iterations over 3 weeks we had the script pretty much pinned down. Very impressive!   The Illustrations: Here again I had no clue on how to proceed. I had thought about finding an illustrator on my own, but I soon discovered that might be a mistake since they had to work intimately with the publisher, providing inputs to match their production techniques. So I decided to use Mascot, who has a pool of independent and highly skilled illustrators they contract with directly after selected by the authors. This would also simplify logistics since Mascot took care of all contracting issues. I  would even own the illustrations! My editor selected six illustrators she thought were appropriate for the story being told. I selected three, who were then given the script and asked to provide sample sketches of Pete and my mom. It took a little time, but the process was very well orchestrated and I ended up with an exceptionally talented illustrator. 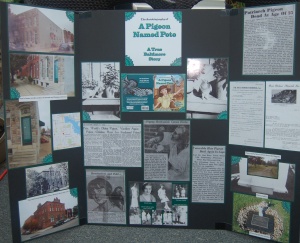 The Book: I now had the pieces and needed to put them together. I was told how many pages this type of book typically had and that the next step was to lay out the spreads (what words went on each page and what images the illustrator needed to produce to match the words). I already had some thoughts about that, and the editor did an independent assessment. We ended up pretty close and gave this information to the illustrator. I asked her to do what I had told others along the way…treat it like it was your book! And so she started producing incrementally more detailed sketches, allowing us to make any adjustments required along the way. A year later (these were very detailed illustrations), we were finished. In the meantime, I had been working with the Mascot designers on the other parts of the book (front/back cover, title page, introduction, acknowledgements, collages for the front/back of the book containing the newspaper articles about Pete, various pictures and documentation). Once all the pieces were available it was only about two months before I had the book in my hands. It was beyond my and my illustrator’s wildest dreams!   The Marketing: Mascot already had connections with the large book distributors (wholesale and retail) so that part did not involve me at all. I had Mascot provide me a website design that they installed on my provider’s site and linked to theirs for orders. Lots of great information was provided by Mascot on how I should go about marketing my book. I also purchased bookmarks for book signings and postcards to give to potential vendors. All these parts were easy and straightforward. 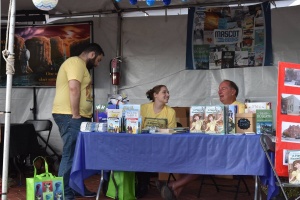 Now the hard part was just starting for me. How and where to advertise this book? The story has close ties to Baltimore, but the story is universal. Luckily, Mascot was having a booth at the Baltimore Inner Harbor Book Fair about a week after I got the book, and they offered me to a chance to get my feet wet in book signing by scheduling hour-long book signing sessions on each of the three days of the event. I read up on the do’s & don’ts of book signing and put together a tri-fold display board containing the collage information contained in the book. I also had t-shirts made with the front cover image. Both proved invaluable. I was stopped multiple times while walking around the harbor by people who wanted to know what my T-shirt was about. I learned much at this event. My illustrator even attended to co-sign, so I got a chance to meet her for the first time. I’m thankful for all the guidance that I received from Mascot. They helped me along every step of the way in making The Autobiography of a Pigeon Named Pete into a reality. And though the book is finished, I still say, “I’m NOT an author!” -Gary Meyers