Skip to content
SUBMIT YOUR BOOK IDEA
By: Emily Evans-Miller Contributing Writer: Cecilia Zugel   Here at Mascot Books, we love helping writers achieve their dreams! From first draft to finished book, we work with our authors every step of the process to make sure that their book is the best it can be. It shouldn’t surprise you that we’re experienced in all aspects of publishing, but did you know that some of our staff are authors and writers themselves? This week, we talked to several of our team members to find out their tips for staying motivated when writer’s block hits. Michelle Webber, Senior Marketing Manager 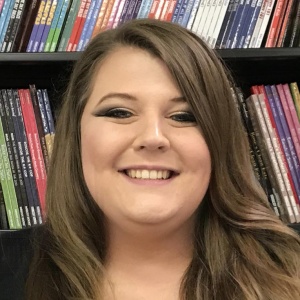 What do you write? All of my in-progress novels are science fiction, and I have an especially keen love for apocalyptic stories. I’ve also recently written a few short stories in the southern gothic and midwestern gothic genres, along with some nonfiction essays about my family. And, of course, I write electronic press kits, press releases, and websites for Mascot authors every day!   What are you currently writing? Right now I’m working on a short story about two boys who discover an injured horse. What happens afterward alters their childhoods forever.   When did you start writing? I actually know the exact day. It was August 14, 2006, and I wrote a horrible poem about when it rains in summer in a teal spiral notebook. I’ve kept that notebook and all the other ones since; it’s amazing to look back and see how my writing and editing styles have changed through the years.   How do you keep motivated when you don’t feel like writing? It’s important to get connected to a community of writers who are also trying to make it as writers, and paying it forward by engaging with fellow writers’ work is one of the best ways to do that. Plus, reading your friends’ books serves as good wake up call to get you writing again. I also have a writing group with a few of my colleagues at Mascot, Susan, Daniel, and Morgan—we meet up once a week and make an appointment with ourselves and each other to just write. That has really helped me. It’s important to spend time with people who know how hard it is to write and will tell you the (sometimes ugly) truth about your work. Those same people will also encourage you to keep going, because they can see value in your stories that you might not be able to see! Susan Roberts, Senior Production Editor 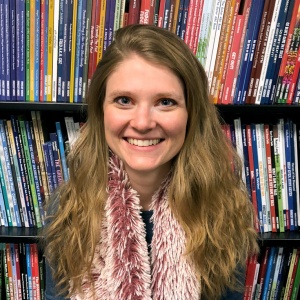 What do you like to write about? I work on a lot of children’s books and poetry, and sometimes I also write middle-grade fiction.   Works in progress? I just finished a long, goofy poem about the Snarlot, a creature who eats mail! I’m also currently working on one middle-grade project about a duck who goes to the dentist and receives a startling surprise.   When did you start writing? I’ve been writing since I was a little kid. My first story was about my bunny, Oreo, who took a field trip to the White House and burrowed under it. I also wrote a story where two characters, who were based on my parents, traveled to a world where animals could talk. I’m sure you’re seeing a pattern here.   What is your best practice for staying motivated when it’s tough to write? The writing group with Michelle, Daniel, and Morgan helps me the most. The biggest challenge is just to sit down and write, and the fact that we’ve given ourselves a dedicated time and space to write with supportive fellow writers makes a huge difference. I also write my drafts by hand first, so I’m forced to take a little more time to type them up. That little bit of extra time spent allows me to think more critically about my work and edit it as I go, moving around different pieces so that I’m actually typing up a second draft into my laptop. Daniel Wheatley, Senior Production Editor 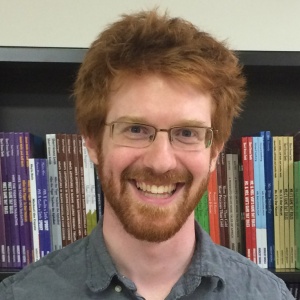 What do you like to write about? I write speculative fiction, so that’s fantasy, science fiction, or sometimes a cross-genre style book. In terms of audience, writing middle-grade and young adult comes most naturally to me.   What are your current projects? Right now I’m working on the sequel to my first published book, The Zanna Function, which came out this past March. I can’t tell you the title of the new book, but it has the same middle-grade fantasy feel as the first.   When did you start writing? That’s difficult to answer. In fifth grade, we read The Phantom Tollbooth, and one of our assignments was to write an additional chapter. For that assignment, I wrote thirteen pages—as a fifth grader! They were probably not that good, but I really got into it. Then, in high school, I took a creative writing class. My teacher, Mr. Booth, was one of the first people to tell me that if I was willing to put in the effort, writing could actually be a viable career path for me. Having that person who believed in me and the coursework that pushed me to write as more than a hobby helped me imagine that I might actually become a writer for my career. I went on to study English in college, and it’s all downhill from there.   What’s your advice for people who are feeling unmotivated to continue writing? Well, now I have no choice but to keep writing because several people have threatened bodily harm if they don’t get the second book. But before that, I think the secret was just stubbornness. Eventually you get to a point where you have the idea for a story and you’ve been wrestling with it for quite a while, and you need to acknowledge that there’s a reason why you want this story out there. A big part of continuing to write even when it’s difficult is coming to the realization that you really want people reading this story, but no one else will tell it the way you want it to be told. If you keep that in mind and put in the work, it’s a lot easier to keep writing. Another thing that can be tough is the fact that we have a tendency to compare ourselves with people who are more established authors or faster writers. In the end, writing is a very personal line of work, and comparing yourself to others won’t help you—it’ll only distract you from making your work the best that it can be. Andy Symonds, VP of Business Development and Acquisitions 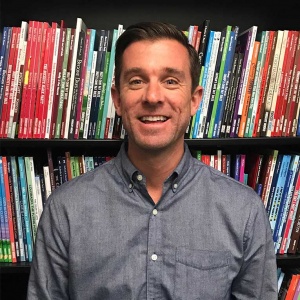 What kinds of books do you write? Having grown up with a dad who was in the Navy for 33 years, I’ve felt inspired to write military fiction about Navy SEALs and their families. Right now I have two military fiction books that were both published by Mascot before I worked here—that’s actually how I got to know the company.   What are you currently working on? I actually just finished my third book, which is about a boy and his dog who has cancer. Together, they embark on a journey to complete a bucket list that includes everything from surfing to skydiving to eating barbeque in Memphis. I’m also working with the wife of a SEAL Team 6 sniper to write about her experience being married to a man who could be called to leave at any moment to go anywhere in the world on a mission that she isn’t allowed to know about—and one that she doesn’t know if he’ll even come back from.   When did you start writing? I started writing when I was a little kid! My parents actually came and visited recently, and they brought this old trunk full of stuff from when I was little. In it, I found my first novel, The Adventures of Ricky and Jimmy. I wrote it when I was eleven, and now it’s sitting in the trunk, all typed up, double-spaced, and actually edited pretty well, I’d say!   What’s your secret to staying motivated? I always just try to take it one thing at a time, because if you look at the entire picture and start thinking about everything you need to do for your book, you’re going to get overwhelmed. The thing I always have to tell myself is this (it’s actually a Navy SEAL quote): “How do you eat an elephant? One bite at a time.” Eating an elephant can be pretty overwhelming, but if you just keep at it, little by little, you’ll get there. Jess Cohn, Acquisitions Editor

What do you like to write about? I’m mainly a fiction writer, but I’ve also written a few nonfiction essays. I usually write short stories and novels in the young adult genre.   What are you working on right now? I have a finished novel that’s currently being edited. It’s about a girl living in a dystopian world where women rule over men. Her entire world changes when she realizes that she has a twin brother—and that everything she’s been told is a lie.   When did you start writing? Probably when I was five or six. If you go up in my attic, there are bins full of short stories that I wrote when I was little. I used to play around with stories, but I never thought of myself as a writer. By the time I was fourteen, my parents had started to tell me that this was more than just a hobby. At that point I started making time to sit down and write.   How do you stay motivated? I use a free website called pacemaker.net. You can input your overall goal and it plans your day-to-day steps to reach that goal. I look at it and customize it so that I write more on the weeks that I have the most time. It helps me stay on track and reach my deadlines and goals. Ben Simpson, Acquisitions Editor 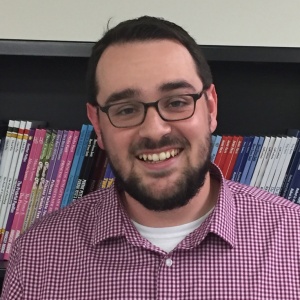 What do you write? I write humor books!   What’s your current project? Right now I’m working on a book with a friend. If I had to describe it, I’d say it’s a funny fantasy.   When did you start writing? I’ve been writing since I was in high school, so probably seven or eight years.   How do you stay motivated? That’s tough to do! I try to find a couple evenings a week to set aside time to write. I think it’s so important to schedule a time and hold myself accountable to it. No matter what else I’m doing in any given week, I know I’ll work on my stories at that specific time. If I build writing into my schedule, I’m more likely to follow through than if I just write whenever I feel like it, because sometimes I feel like hanging out and watching Netflix instead. Another thing that helps is that I’m always taking notes. A lot of funny and weird things happen in the office, and I try to write them down in my phone right away so that I can go back later and type out a full-fledged funny story or stand-up comedy sketch. If you’ve ever wondered what Mascot employees are doing in their spare time, there’s a good chance they’re writing their own stories—and oftentimes doing it together! We hope that you found their advice about having a writing support system, a set schedule, and a bit-by-bit mindset helpful. Who knows—maybe you’ll be publishing with us soon!